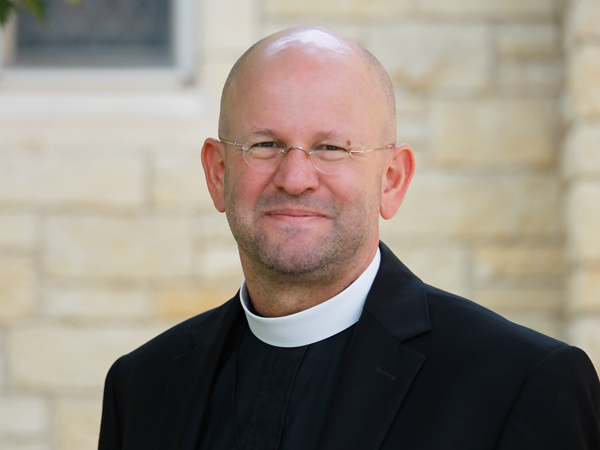 Pastor Bruss, a native of Hartland, Wisconsin, has been at St. John’s since 2013. He earned his MDiv from Bethany Lutheran Theological Seminary (ELS) in 1994 and was ordained into the ministry in 1997. He colloquized into the LCMS in 2006. Pastor Bruss also earned an MA and PhD in classics and philosophy from the University of Minnesota. He served his vicarage at Norseland Evangelical-Lutheran Parish, New Sweden, Minnesota.

His first Call was to Bethany Lutheran College in Mankato, Minnesota, where he taught Greek, Latin, German, Western humanities, and theology, served on the chapel preaching staff, and provided pulpit supply for parishes in Minnesota and northern Iowa. In 2008-2009, he was vacancy pastor at Calvary Lutheran Church in Topeka. He was called as assistant pastor to St. John’s in 2013, and in 2015 as senior pastor.

In addition to his preaching and teaching duties at St. John’s, Pastor Bruss serves as the circuit visitor, represents St. John’s on the board of Topeka Lutheran School, and is a contributing translator to Luther’s Works (Concordia Publishing House) and a member of the Concordia University System board of directors. He and his wife, Kris, have one daughter, Ingrid.